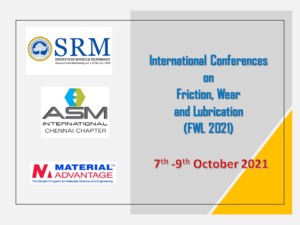 About the conference and ASMICC

Friction, wear and lubrication are the inevitable phenomena which control our daily life. But whether friction is a boon or a bane depends on the type of applications we are talking about. It is correctly pointed out by several researchers that a country’s GDP fully depends on the control of friction, which ultimately controls wear. To minimize friction and reduce wear, one of the best possible way is to use a lubricant. However, the selection of a correct lubricant according to an application is always a challenge for several industries. The practice of controlling friction and wear and using the correct grade of lubricant will enhance the life of the machineries, increase the output, and reduce the consumption of energy, thus leading to the economic growth of the country. Several industries are successful in controlling friction and wear with the proper selection of lubricants, and hence those industries have always shown a profitable curve. With the advancement of technologies, there has been enormous development in research in the areas of combating friction and wear. The lubrication industries have also developed high end products for critical applications, also looking into the concern for environmental hazards.
To provide a common platform to work in friction, wear and lubrication, ASM International Chennai Chapter (ASMICC) has decided to focus on friction, wear and lubrication. The regular discussions of the members of ASMICC and their concern about friction, wear and lubrication gave birth to this conference which is the first in series. ASM International Madras Chapter was inaugurated on 10th June 1985, under the chairmanship of late Mr. T.V.N. Kidao, a renowned metallurgist. The Honourable Minister for Industries, Government of Tamil Nadu Mr. K. Rajaram was the chief guest. Dr. Brian Ives, President, ASM International, U.S.A. (then Known as American Society for Metals) and Dr. Agrawala travelled to Madras – specially for this purpose and handed over the charter to Mr. T.V.N. Kidao during the grand inaugural function held at Hotel ITC Park Sheraton, Chennai. Subsequently the name was changed to ASM International Chennai Chapter. The ASM headquarters in USA has introduced a system for assessment of the performance of different chapters. The Chennai chapter took up the challenge and the past chairman Mr. Veluru Parthasarathy activated the chapter by conducting various programs. The Head Quarters awarded the Chennai Chapter with the Five Star award in 2001-2002 which was the only chapter to receive the Five Star Award outside U.S.A. at that point of time. Then onwards, the Chapter has continued to get several awards. Recently, under the Chairmanship of Dr. M. Kamaraj and the support from all the members, the ASMICC got the prestigious awards in innovative programming and membership retention and recruitment from ASM International. ASMICC always believes on the younger generation and cultivates the notion of leadership in the young members. The belief of the senior ASM members on the young generation ASM members have resulted in successful flagship events such as the International Conference on Heat Treatment and Surface Engineering (HTSE) in 2013, 2016, and 2020 along with numerous workshops.
ASMICC understands the importance of controlling friction and wear as well as the selection of right lubricants and hence, ASMICC took a major decision of organizing the “International Conference on Friction, Wear and Lubrication (FWL)” jointly with Material Advantage and the Department of Mechanical Engineering, SRM Institute of Science and Technology, Kattankulathur Campus. The conference will not only be a common platform for the participants to share and display their research results but will also act as a connecting gate between the industry and academia.